For our Ideation Studio project, we designed a smart shade that simulates sunrise and sunset inside of a room to improve sleep quality for shift workers.

1 in 5 members of the U.S. workforce works atypical shifts
1
. We found in our literature review that atypical shift workers have a higher risk of dying from disease such as heart disease and cancer
2
, and that long-term shift workers have “lower scores on tests of memory, processing speed and overall brain power than those who worked normal office hours”
3
.

A key insight was that “working the night shift challenges the body’s natural circadian clock, which is linked to all sorts of health problems”
2
. To help shift workers fix their circadian cycle, we designed a smart shade / lamp to control the amount and color of light in the bedroom.

Exposure to bright light in the first few hours after waking up is correlated to better sleep at night
4
. Lux creates an artificial sunrise for the shift worker who usually wakes up in the dark, allowing them to wake up to bright blue light.

Exposure to bright light before going to sleep or while sleeping is correlated to worse sleep at night
5
. Lux creates an artificial sunset for the shift worker who usually goes to sleep during daytime, reducing their exposure to melatonin-suppressing blue light before and during their sleep time.

We created a suite of 30 concepts based on the prompt, How might we improve sleep quality for atypical shift workers? 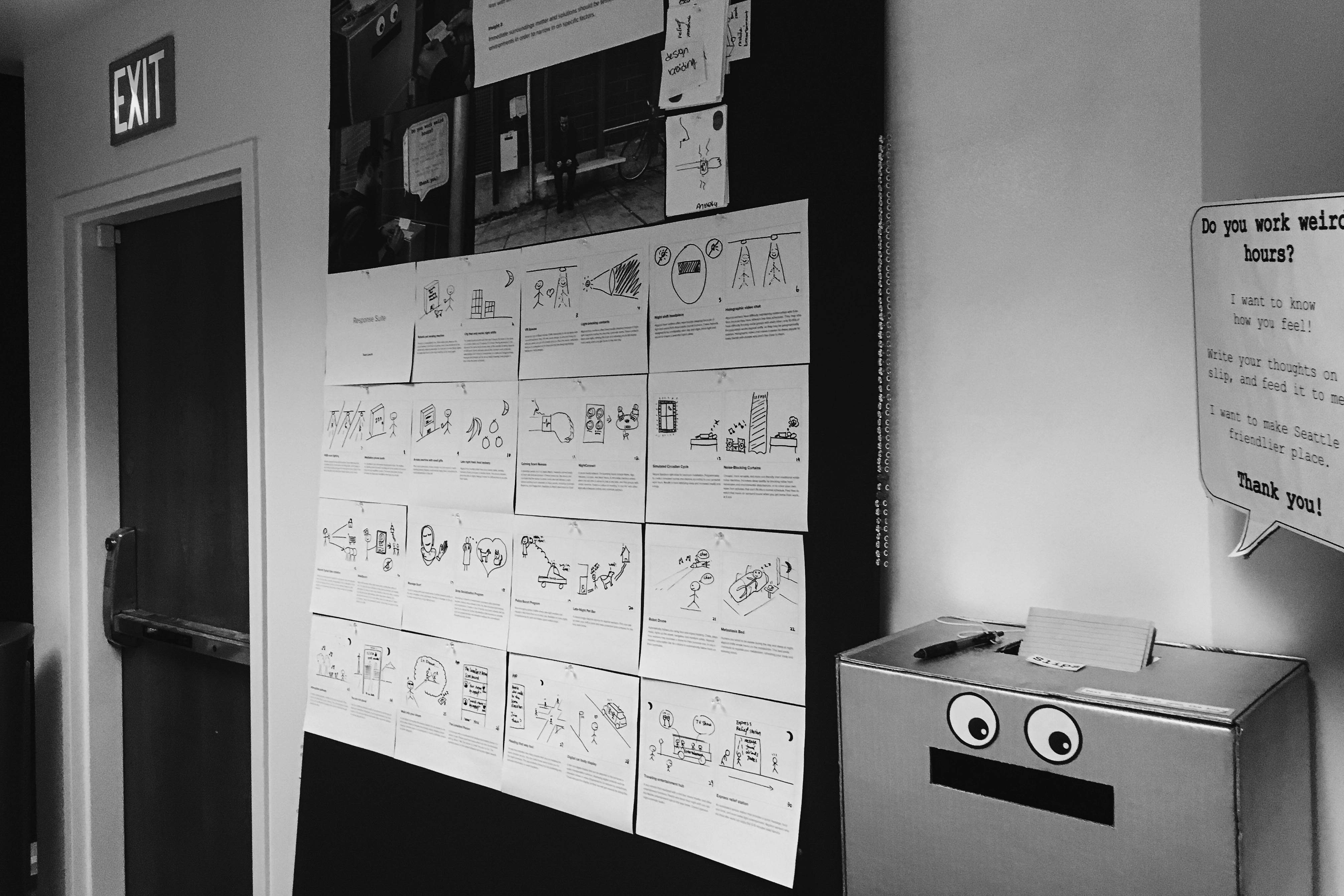 We ranked the 30 concepts on several variables, including the benefit to the user and the technological feasability of the concept.
We chose the 5 most promising concepts and storyboarded them. 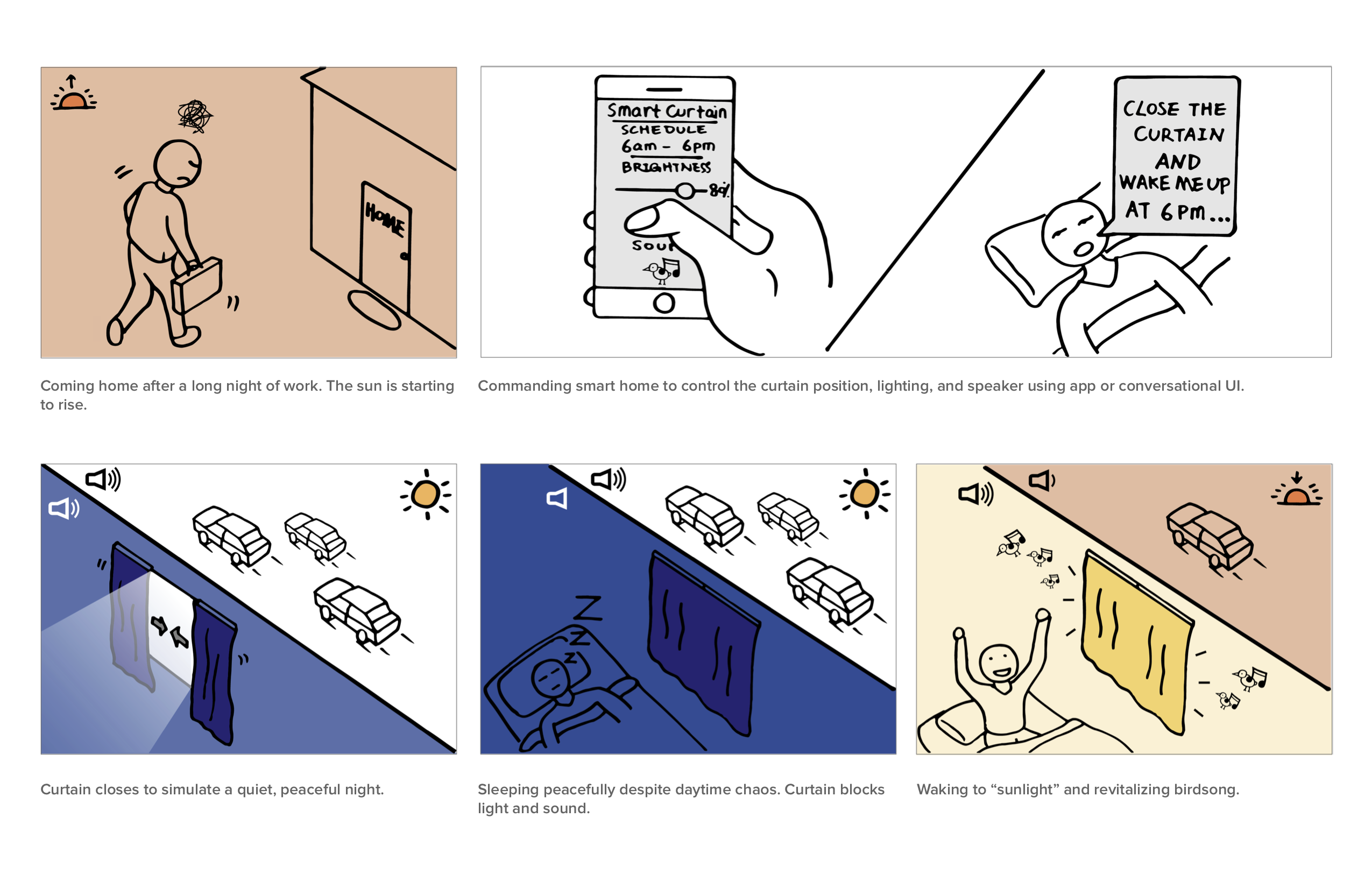 Finally, we chose the smart curtain concept because it met our requirements of being realistic, narrow enough to design well in our time frame, and interesting to all of the team members.

We created and tested two iterations of prototypes — a paper prototype and an Invision wireframe. With each version, we tested with 3 people and then created the next iteration correcting the most obvious usability errors. 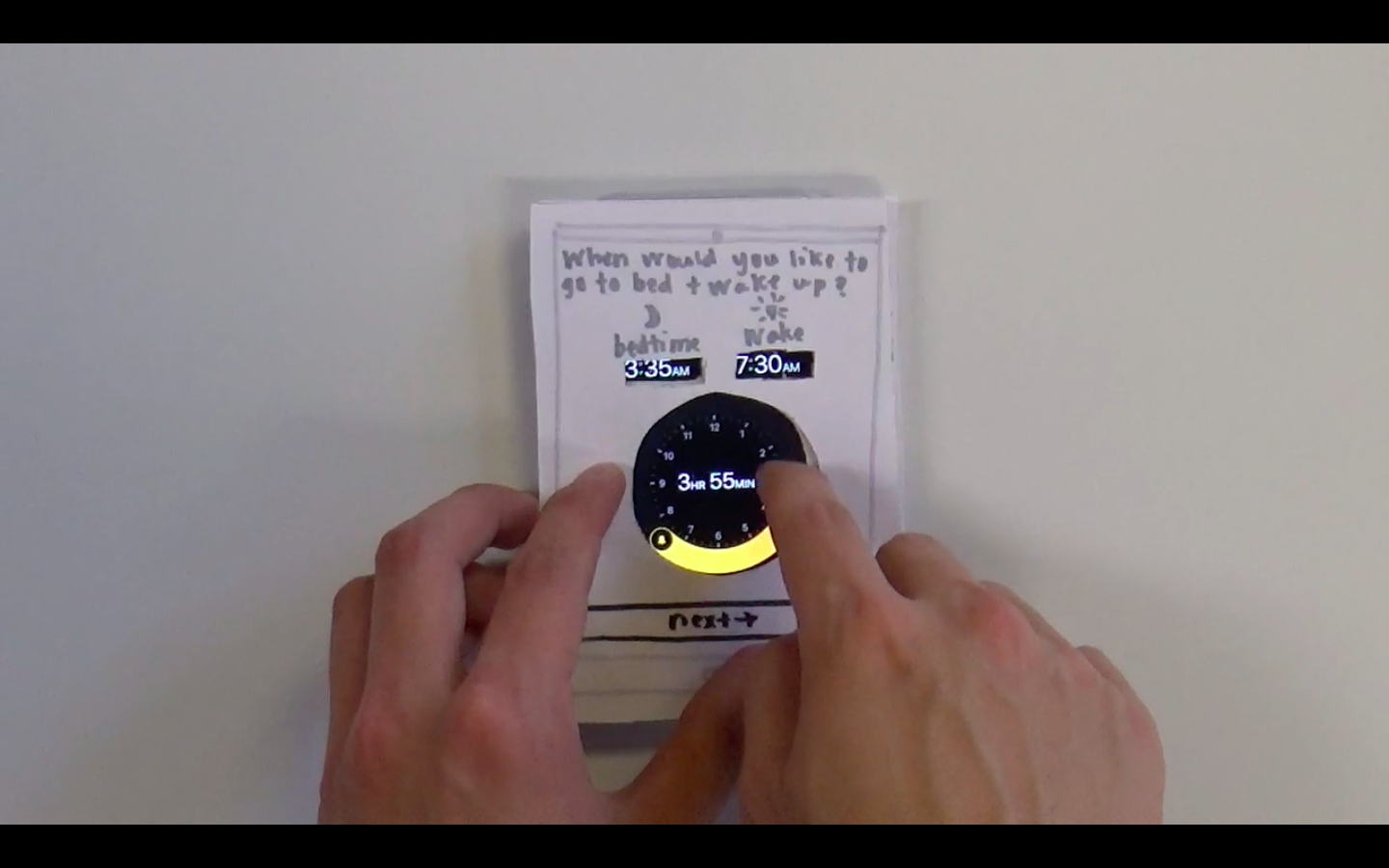 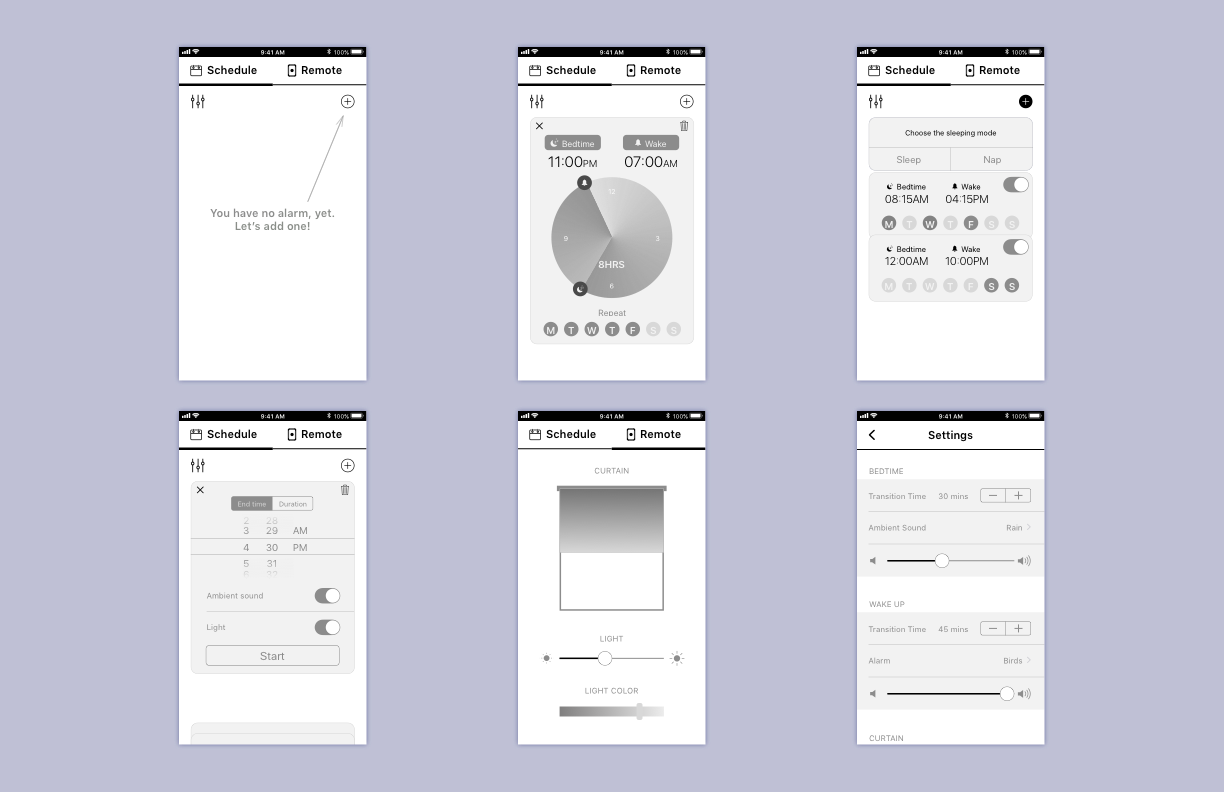 Based on insights from testing and design reviews, we created the final UI Spec for Lux including hero flows, flow diagram, and some motion studies. Will, who has a background in industrial design, created a 3D model of the shade to help our audience understand how the shade responds to user input. 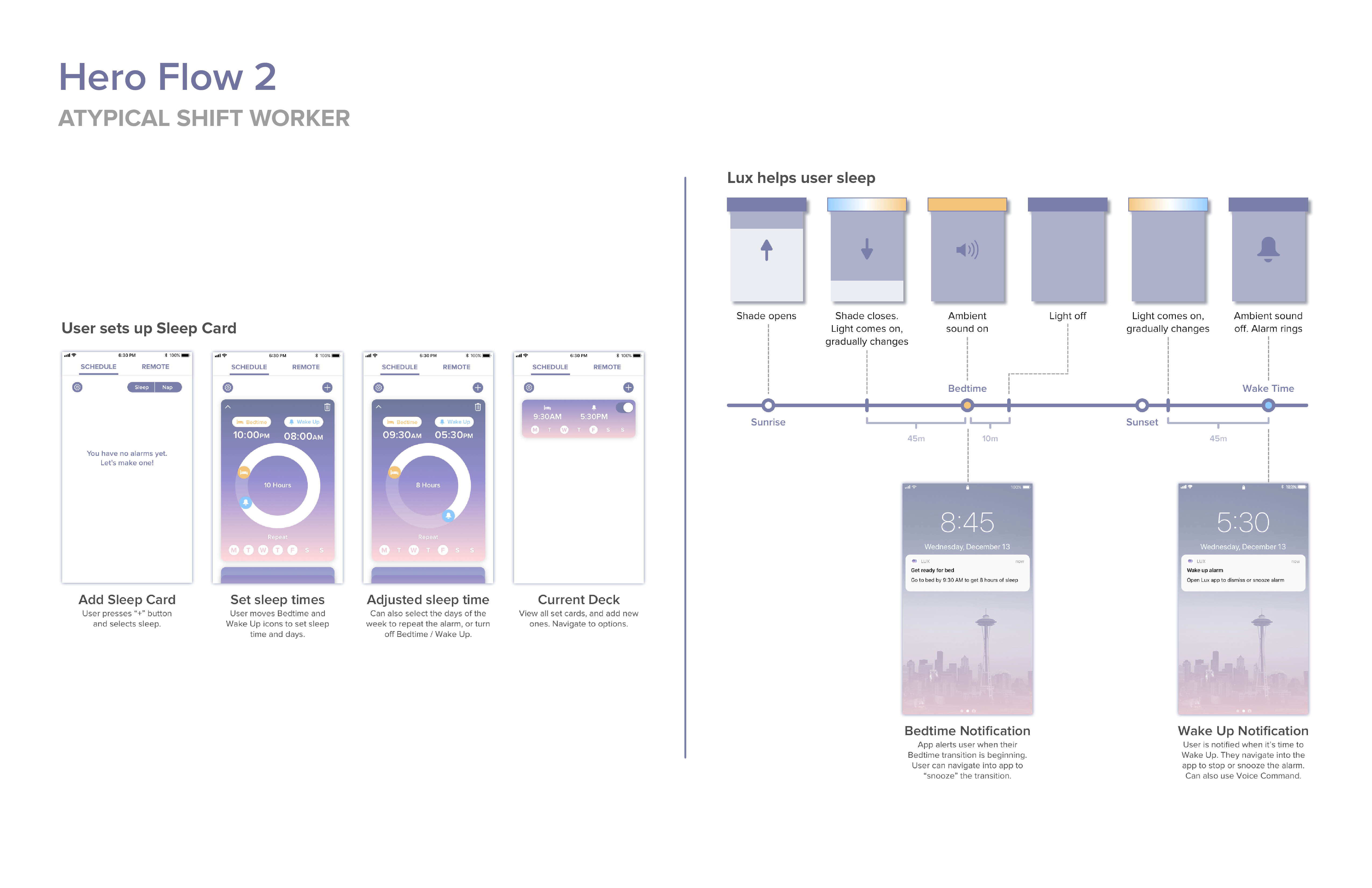 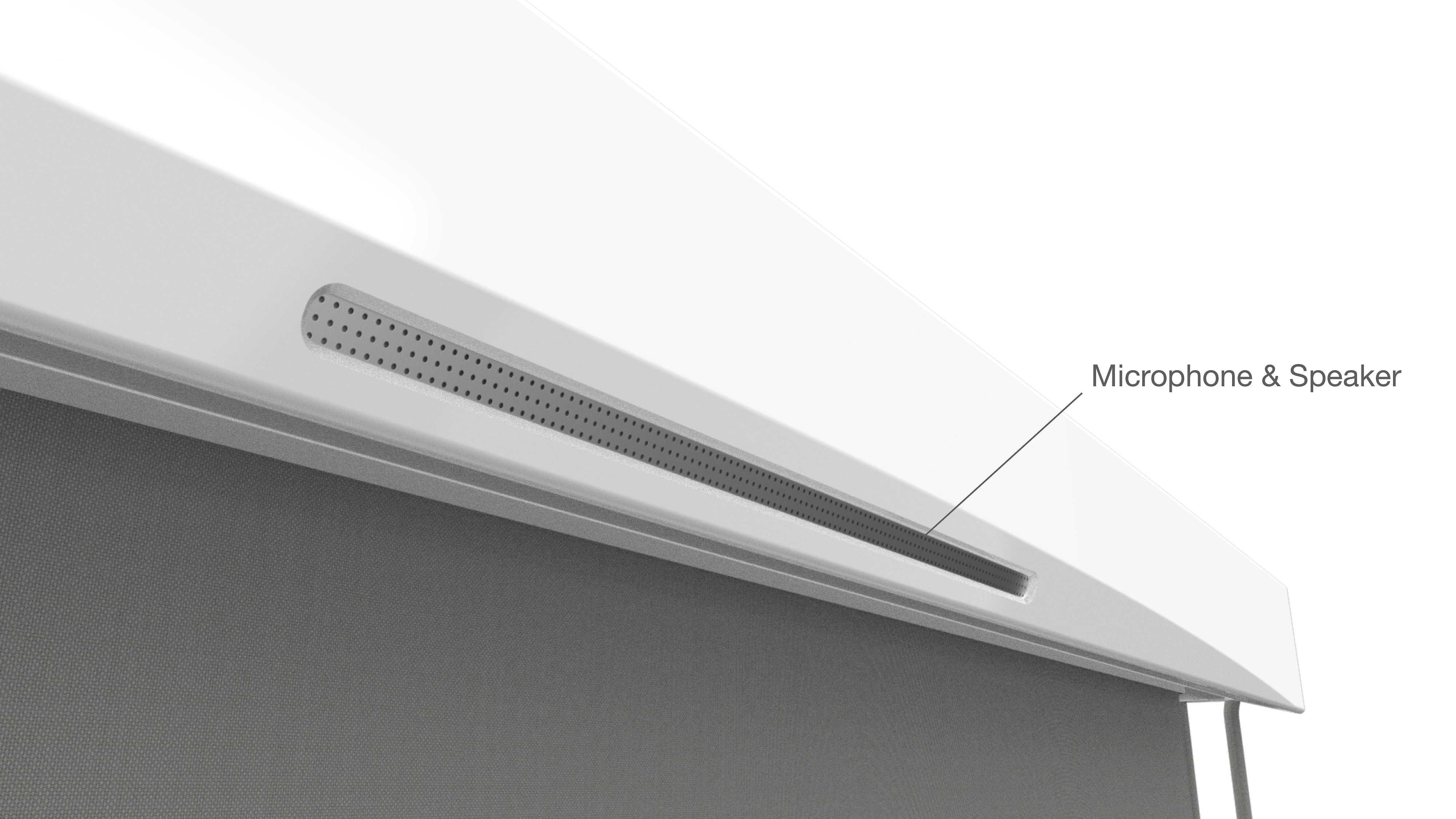 The slider in the paper prototype tested well, but as a team, we decided that we didn’t want to imitate Apple’s UI too closely. With the goal of originality, we made many iterations of sliders, eventually settling on a version with a radial gradient. 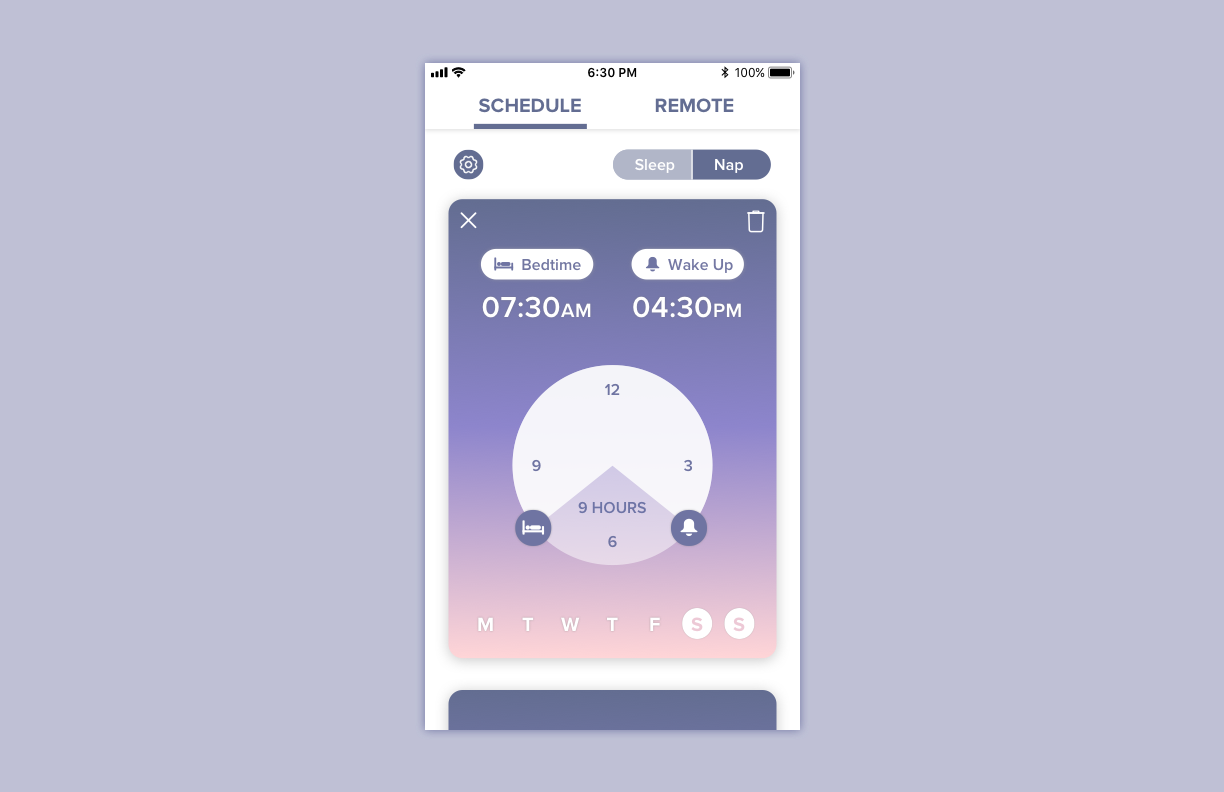 During an in-class design review, our director noted that the function of this “gradient slider” could be confusing because of its visual similarity to a clock, in which the two hands represent hours and minutes of a point in time, rather than the two clock times (bedtime and wake up time) that we wanted to suggest with the two sliders. Classmates echoed this point of confusion.

In light of the feedback, and without time to create and test another novel control, we switched back to something pretty closely resembling the original Apple Bedtime for our final spec. 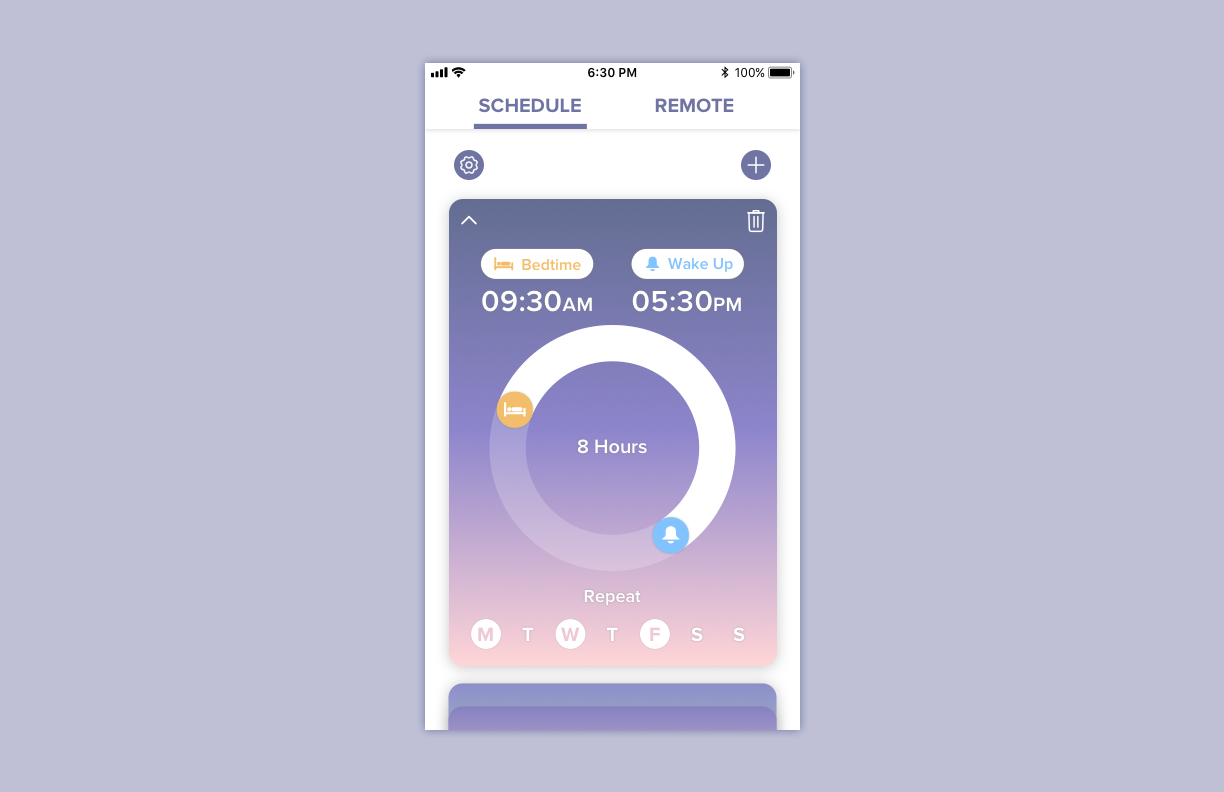 Our takeaway — UI design is not fine art. Originality may be an personal value for highly creative teams, but originality its own sake can have unanticipated consequences.

Meet some of the students from cohorts past and present

Propose a project of interest to your business or mentor a student initiated project.

Learn more about the MHCI+D program and experience

About the Program The Curriculum